When we surveyed creative and marketing leaders in the spring, almost 56% reported that effectively managing proofing, reviews and approvals of their team’s creative work was one of their key challenges. In fact, fixing their feedback loop was second only to time management on their list of major frustrations.

It’s easy to understand why. Momentum tends to grind to a halt when it’s time to seek feedback from outside stakeholders, especially if your review and approval process is unorganized or ad hoc.

Does this sound familiar?

We understand that the review and approval process is often painful for creative and marketing teams, which is why we use automation to take the frustration out of getting feedback. The Workgroups DaVinci proofing module is the most powerful in the industry, yet still intuitive to use.

It all starts when you set a review stage within an activity. Once that activity finishes (let’s say it’s mockups of a Black Friday print ad), the designer uploads a proof and sends it out for feedback to a list of reviewers. Reviewers get an email letting them know a proof is ready for their review. Once they click the included link, they’re taken to the proof, where they can use our annotation tools to mark up the file and leave comments. Reviewers can see the comments and markups left by others, so the annoyance of six people pointing out one typo vanishes. Reviewers are also able to attach files to their comments, so if someone really thinks the ad needs a more photorealistic image of a turkey, they can attach realturkey.jpg to their comment. No need to email it to the designer as an attachment. Speaking of emails, you can also choose the frequency of notifications reviewers receive and who receives them. This means that stakeholders who simply need to offer their two cents and then exit the review and approval process aren’t bombarded with messages every time a new comment or annotation is made. 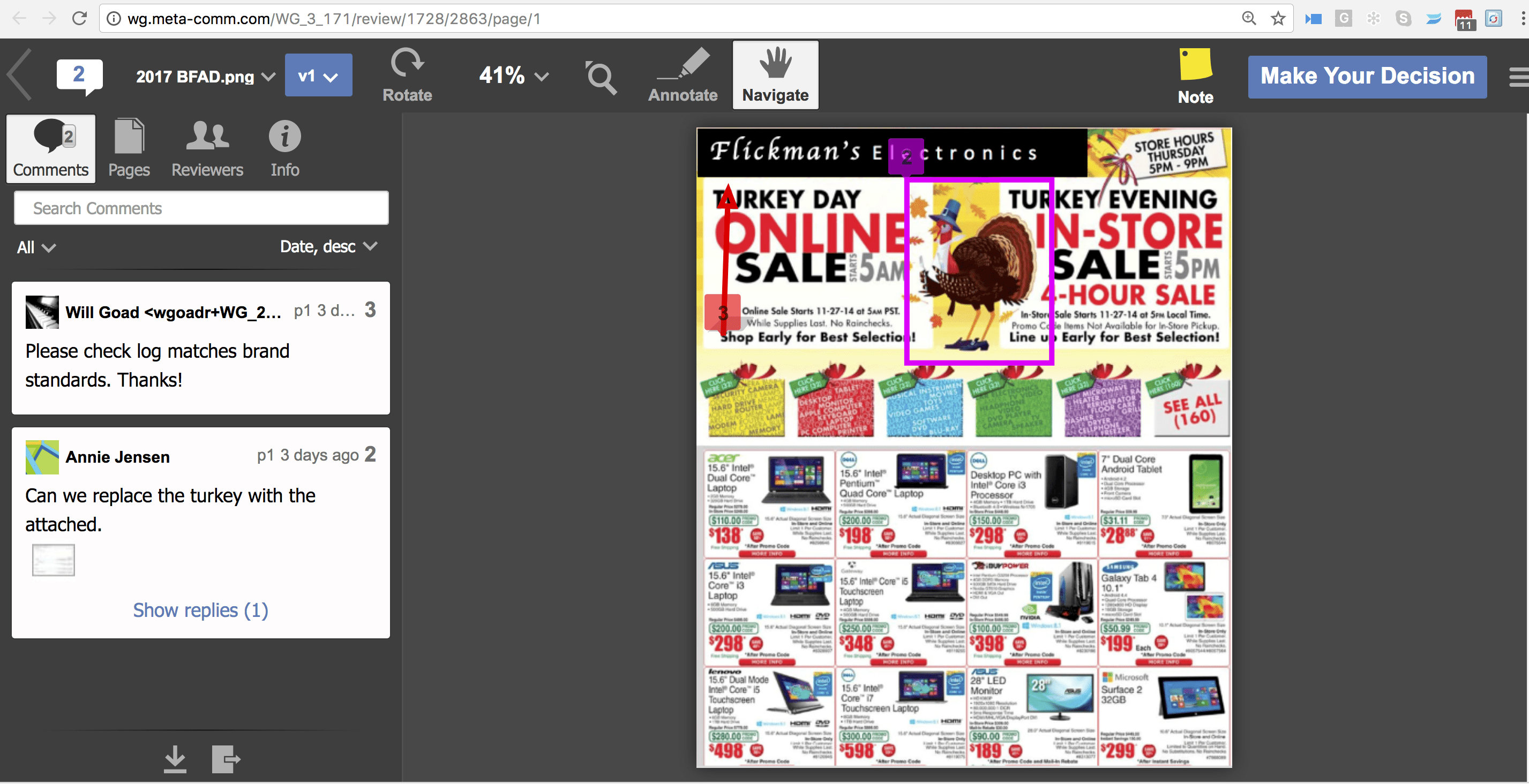 Our version compare feature means that minor changes don’t get missed and no one is stuck playing the “spot the differences” game as they squint at two very similar-looking proofs trying to discern the tiny but critical adjustments that were made from the old iteration to the new. You can look at versions side-by-side to see how work is evolving or in overlay mode to pick up on those little differences at a glance. Workgroups retains all versions, so, if at the eleventh hour, the decision is made to ditch that photorealistic turkey image in favor of the vector drawing from version four, the designer can easily pull that version up. 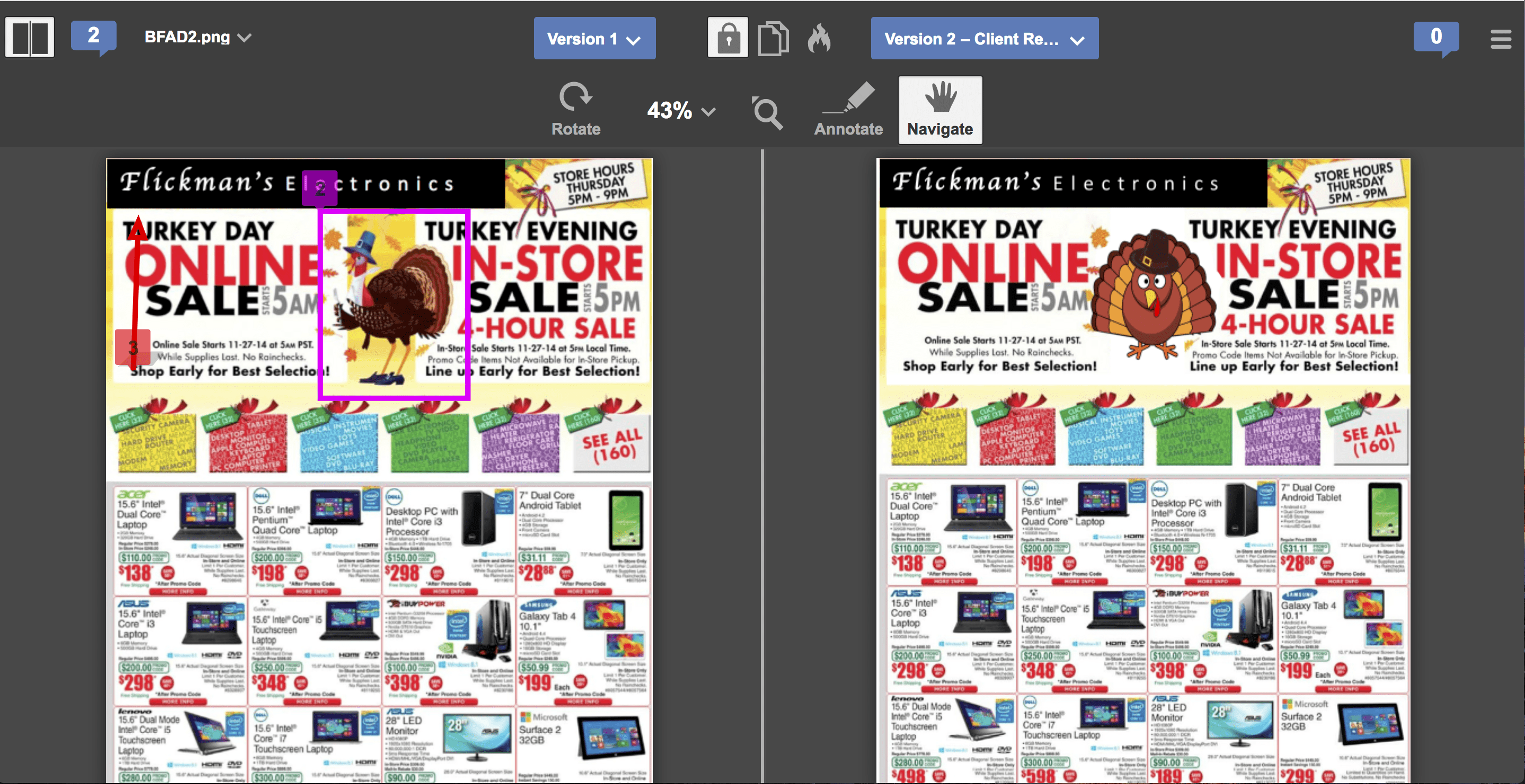 What if you have a multi-stage review process with collaterals that need to be signed off by Marketing, Legal and the CEO herself before they can be finalized? Workgroups offers advanced routing to allow you to set up this trigger-based review process as a template or within a given job. This means that instead of a traffic manager manually managing the process of moving the proof from one stakeholder group to another, our system drives it from stage to stage seamlessly.

Proofing is a necessary part of doing creative work in a collaborative environment, but it doesn’t have to be painful. We’ve taken the legwork out of getting approvals and reviews with smart automation and precise annotation–no more manual management, protracted lag times or unorganized and redundant feedback. We can’t guarantee that all of the feedback your team receives will be valuable (Papyrus will never be the right font choice, Dave), but we can make collecting and acting on it a smooth and efficient process.